PICARD mission and the design of BOS sensor

SUN, a variable star, its  activities are directly impacting on the climate of the  Earth.  In order to study the Sun-Earth climate connections, the  PICARD satellite was launched at June, 2010.  The payload instruments are focusing on:

The BOS (Bolometric Oscillation Sensor ) is a part of the SOVAP (SOlar VAriability for PICARD ) experiment. SOVAP is composed with the absolute radiometer DIARAD (DIfferential Absolute RADiometer), which is carrying out the total solar irradiance monitoring, and the BOS, which is operated continually with a 10 seconds cadence to fill the time gaps between opening and closure phases of the DIARAD absolute radiometer.

it receives solar radiation at the front plate:

absorption of the disk plate,

, radius of the disk.  According to the Stefan-Boltzmann law, the energy will be remitted back to the Space by the front and back surface area of the disk if the thickness of the disk is negligible.

,  we can find solar irradiance

In practice, it is more complicated. Firstly, it is impossible to know the surface temperature of the disk without using measurement elements,  thermistors, power supply, resistances, amplifier etc. Once the electronics are setting nearby the detector, or to say, the detector is a part of  an instrument,  then the

.  The temperature measured is also related to the environments.  In addition,

is degrading with time. Thus, in order  to conduct the correct experiment for the temperature  measurement, the

must be measured as near as possible the value of

.   Secondly, for instance, if the sensing unit is orbiting Earth,  the measured temperature is not only solar origin, but also related to the reflected visible and remitted infrared radiation from the top of the atmosphere and plus the ambient noise from the satellite environment.

The challenge is obvious.   How to measure the electromagnetic radiation from Sun and Earth at the same time as the sketch showed above, meanwhile to minimize the ambient thermal noise? Which is also the goals of PICARD-BOS.

Design philosophy to meet the  challenges

The schema shows the configuration and the working principle of  BOS. The main detector is thermally isolated from the satellite.  The temperature of  the black surface is recorded by the fist NTC thermistor

,  which is directly related to the electromagnetic radiation of Sun and Earth.  The second NTC thermistor

is measuring the temperature of a junction where the lighter mass

is connected with a heavier mass

was coated in white, which has a lower absorption coefficient compare to the black painting of

. In terms of wavelength, it is only sensitive to the infrared radiation from Earth.

is cooled by the

and thermal balance of BOS is reached. It means the thermal gradient between 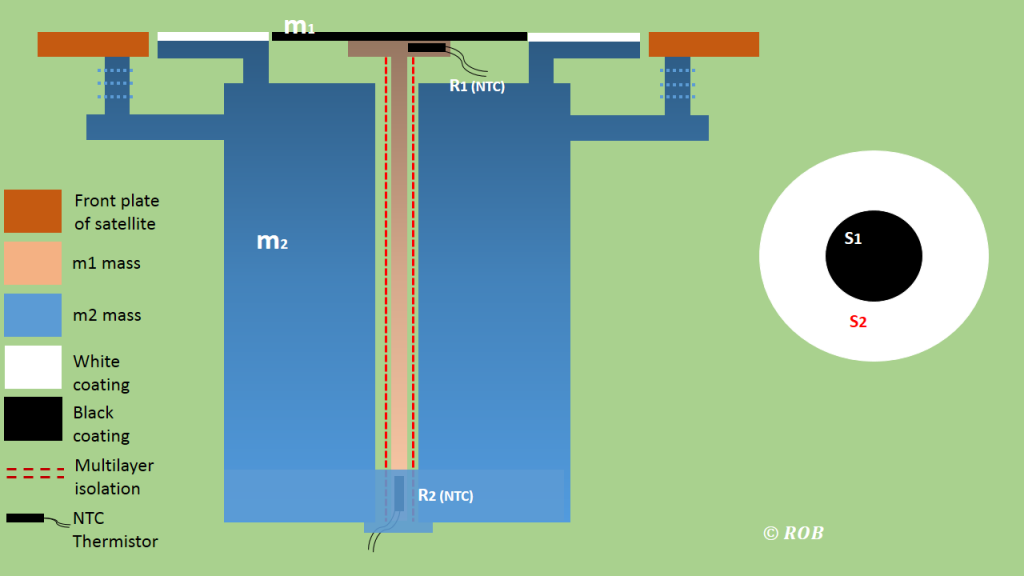 The BOS is composed with two detectors, the black coated detector weighted 8 gram and the white painted detector with a 160 gram heavier mass.  The black detector will take all electromagnetic radiation, but the white channel is only sensitive to the infrared radiation. The

detector is completely isolated from the

by the multilayer isolation. The sensor unit is passive thermal stabilized by such a configuration. Two NTC thermistors are separately setting up under the surface m1 and at the end of a mechanical shunt, where it is connected to the mass

mass is fixed to the front plate of the satellite.

The BOS mechanical part of flying and ground spare model were made at the workshop of Royal Observatory of Belgium. The surface treatment and the painting finishing was realized by the space qualified engineer of Royal Meteorological Institute of Belgium. 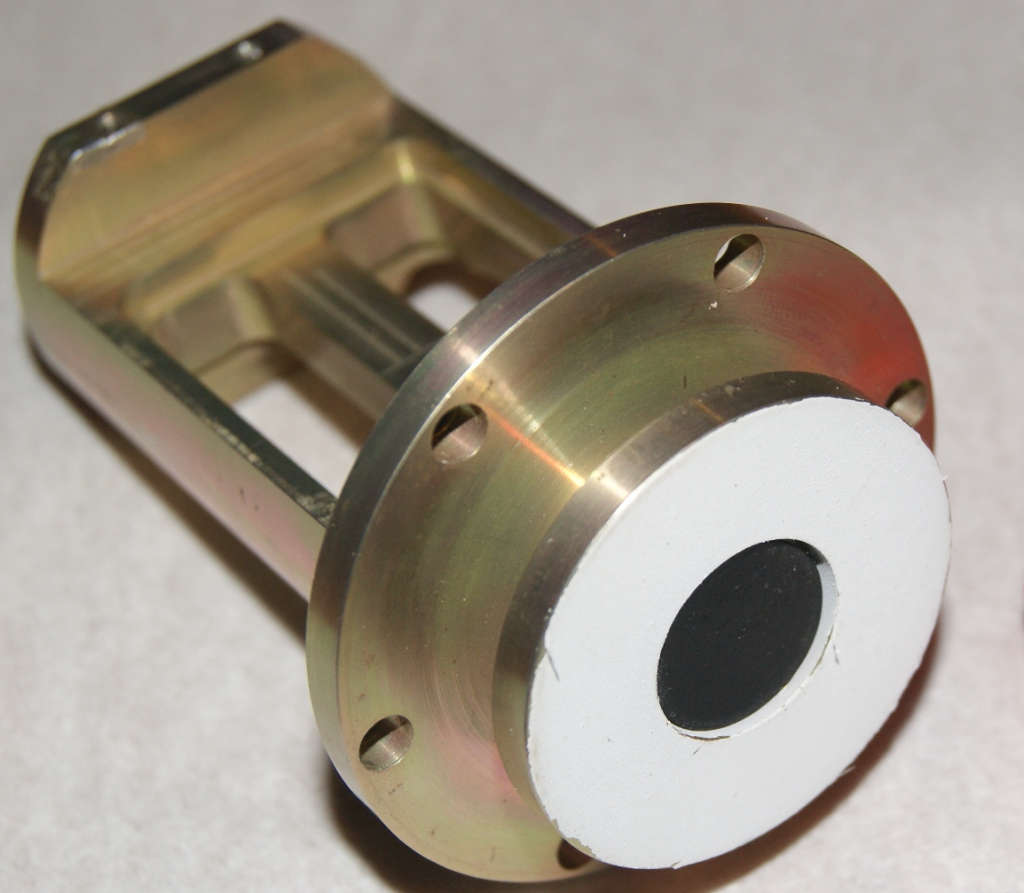 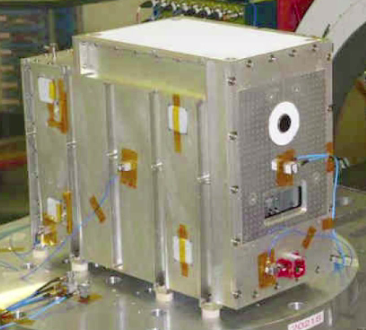 Left is the photo of identical ground spared BOS sensor. Right photo was taken after the BOS is integrated with the DIARAD absolute radiometer and the instrument package was under the vibration test.